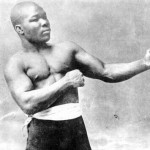 As a youngster, Walcott got a job as a cabin boy on a ship sailing to Boston, Massachusetts.

After settling in Boston, he got a job at a gym and began boxing. Walcott made his professional debut in 1890 and won the World Welterweight Championship in 1901. He held the title until 1904. Walcott retired from boxing in 1911 with a record of 92 wins, 25 losses, and 24 draws. Walcott lost most of the money that he earned as a fighter and worked as a custodian until his death on October 4, 1935. He was posthumously inducted into the International Boxing Hall of Fame in 1991.