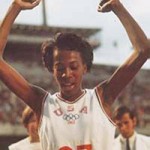 Manning ran track at Tennessee State University where she won ten national titles, set a number of American records, and graduated in 1972. She participated in the 1968, 1972, and 1976 Summer Olympic Games.

At the 1968 Mexico City Olympic Games, she won a Gold medal in the 800-meter race and at the 1972 Munich Olympic Games she won a Silver medal as a member of the 4 by 400-meter relay team. In 1984, Manning was inducted into the USA Track & Field Hall of Fame. Manning is founder and president of the United States Council for Sports Chaplaincy and has served as U.S. team chaplain at the last six Olympic Games.