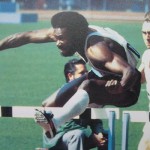 Milburn was born May 18, 1950 in Opelousas, Louisiana. He attended Southern University and during the early 1970s dominated the 110 meter hurdles, tying the world record three times. In 1971, he was unbeaten in 28 races and was named the Track and Field News Athlete of the Year. At the 1972 Munich Olympic Games, Milburn won the Gold medal in the 110 meter hurdles.

Milburn earned his bachelor’s degree from Southern in 1972. After the Olympics, he turned professional, but regained his amateur status in 1980. He remained a world ranked hurdler until his retirement in 1983. From then until 1987, he coached track at Southern. Milburn was inducted into the National Track and Field Hall of Fame in 1993.