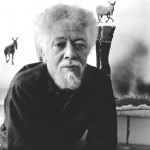 Andrews was born November 13, 1930 in Plainview, Georgia. After serving in the United States Air Force as a staff sergeant from 1950 to 1954, he earned a Bachelor of Fine Arts degree from the School of the Art Institute of Chicago. Andrews had his first New York City solo art show in 1962. In 1969, he co-founded the Black Emergency Cultural Coalition to protest the fact that no African Americans were involved in organizing the Metropolitan Museum of Art exhibit “Harlem on my Mind.”

From 1982 to 1984, Andrews was director of visual arts for the National Endowment for the Arts and in 1983 he was instrumental in forming the National Arts Program which is the largest coordinated visual arts program in the nation’s history. From 1968 to 1997, Andrews taught at Queens College, City University of New York and created a prison art program that became a model for the nation. In 2006, he went to the Gulf Coast to work on an art project with children displaced by Hurricane Katrina.

Andrews’ works are in the collections of many museums, including the Metropolitan Museum of Art, the Art Institute of Chicago, the High Museum of Art, and the Studio Museum in Harlem.