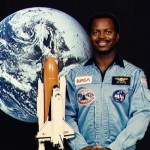 McNair was chosen for the National Aeronautics and Space Administration program in 1978 and flew aboard the Challenger in February, 1984 as a mission specialist. On January 28, 1986, McNair died along with six other crew members during the launch of the Space Shuttle Challenger. A number of public places have been renamed in honor of McNair, including schools throughout the country.