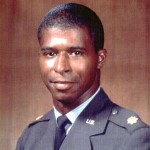 At the age of 20, Lawrence earned his Bachelor of Science degree in chemistry from Bradley University. After flight training, he was designated a U. S. Air Force pilot and over his career accumulated over 2,500 flight hours. In 1965, Lawrence earned his Ph.D. in nuclear chemistry from Ohio State University and in June, 1967 he was selected as an astronaut in the Air Force’s Manned Orbital Laboratory Program.

On December 8, 1967, Lawrence was killed in a plane crash. After many years of obscurity, on December 8, 1997 his name was inscribed on the Space Mirror Memorial at the Kennedy Space Center in Florida.