By Chimsima Zuhri on September 23, 2011 in African American History, September 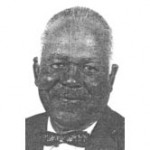 McBay was born May 29, 1914 in Mexia, Texas. He earned his B. S. degree from Wiley College in 1934 and his master’s degree from Atlanta University in 1936. McBay then taught at several educational institutions before accepting a position at the University of Chicago. While doing research at the university, McBay made discoveries that allowed chemists around the world to create inexpensive peroxide compounds which were useful as building blocks in many chemical reactions.

As a result of that research, McBay received the Elizabeth Norton Prize for Excellence at Research in Chemistry in 1944 and 1945. In 1945, McBay earned his doctoral degree from the University of Chicago and returned as an assistant professor to Morehouse College. McBay taught in the Atlanta University system for the next 41 years. In 1951, McBay developed a chemistry education program in Liberia on behalf of the United Nations Educational, Scientific, and Cultural Organization (UNESCO).