By Chimsima Zuhri on May 17, 2011 in African American History, May 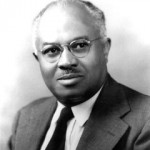 Frazier began his career as a teacher and in 1922 accepted a position as the director of the Atlanta School of Social Work at Morehouse College. However, in 1927 he published the article “The Pathology of Race Prejudice” which argued that racial prejudice was analogous to insanity which stirred such strong reactions that he was removed from his position. In 1948, Frazier was elected the first African American president of the American Sociological Society.

Frazier’s 1957 work “Black Bourgeoisie” was a critical examination of the adoption by middle-class African Americans of a subservient conservatism that derived from the cultural style and traditional religion of the white middle-class. His other works include “The Negro Family in the United States” (1939) and “The Negro Church in America” (1963). In 1995, the E. Franklin Frazier Center for Social Work Research was established at Howard University.