By Chimsima Zuhri on May 1, 2011 in African American History, May 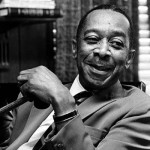 Clark was born July 24, 1914 in the Panama Canal Zone but raised in Harlem, New York. Clark earned his Bachelor of Arts and Master of Science degrees from Howard University in 1935 and 1936, respectively. In 1940, he became the first African American to earn a Ph. D. from Columbia University in psychology. In 1942, he joined the faculty of City College of New York and in 1960 was made a full professor, the first black academic to be so honored in the history of the college.

With his wife, Mamie Phipps Clark, Clark conducted research among children on the effects of segregated education. They are best known for their 1940s experiments using dolls to study children’s attitudes about race. Their work contributed to the 1954 United States Supreme Court Brown v. Board of Education ruling which determined that de jure racial segregation in public schools was unconstitutional. Clark went on to become the most influential black social scientists of his generation.

He received more than a dozen honorary degrees from some of the nation’s finest colleges and universities, including Columbia University, Princeton University, and John Hopkins University. In 1961, he received the NAACP Spingarn Medal for his contributions to promoting integration and better race relations.

After retiring from City College in 1975, Clark formed a successful consulting firm to help large corporations design and implement minority hiring programs. Clark’s writings include “Prejudice and Your Child” (1955), “Dark Ghetto: Dilemmas of Social Power” (1965), and “Pathos of Power” (1974).