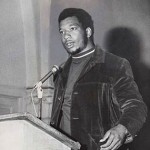 At an early age, Clark became active with the NAACP and joined in demonstrations against discrimination in housing, employment, and education. In the mid-1960s, he joined the Black Panther Party and later organized a chapter in Peoria with a free breakfast program.

In the pre-dawn hours of December 4, 1969, the Chicago police raided the apartment of Black Panther Party State Chairman Fred Hampton, killing Clark and Hampton and seriously wounding four others, including two females. A federal grand jury determined that the police fired between 82 and 99 shots while most of the occupants were sleeping. Only one shot was proven to have come from a Panther gun.

The families of Hampton and Clark filed a civil suit against the city, state, and federal governments which was eventually settled for $1.85 million.