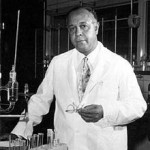 Julian was born April 11, 1899 in Montgomery, Alabama. He earned his Bachelor of Arts degree from DePauw University in 1920, Phi Beta Kappa and valedictorian and became a chemistry professor at Fisk University. In 1923, Julian earned his Master of Arts degree from Harvard University but because they were worried that white students would resent being taught by an African American, Harvard withdrew his teaching assistantship.

Julian earned his Ph. D. from the University of Vienna and while in Europe found freedom from the racial prejudices that stifled him in the United States. After returning to the U. S. and being denied a professorship at DePauw for racial reasons, in 1936 Julian became Director of Research for Glidden Company where he worked until 1953. That year, he founded Julian Laboratories, Inc. which he sold in 1961 for $2.3 million. During his career, Julian received more than 130 chemical patents and his work was the foundation for the steroid drug industry’s production of cortisone and birth control pills.

In 1947, Julian was awarded the NAACP’s Spingarn Medal and in 1973 he was the second African American elected to the National Academy of Sciences. In 1980, the Percy L. Julian Mathematics and Science Center was dedicated on the campus of DePauw University, in 1990 he was posthumously inducted into the National Inventors Hall of Fame, in 1993 the United States Postal Service issued a commemorative postage stamp in his honor, and in 1999 the American Chemical Society recognized his synthesis of physostigmine as one of the top 25 achievements in the history of American chemistry.