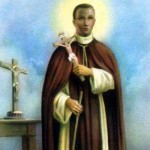 De Porres was born December 9, 1579 in Lima, Peru. At the age of 15, he was admitted into the Dominican Convent of the Rosary as a servant boy. His piety and miraculous cures led his superiors to drop the racial limits on admission to the Order and he was made a full Dominican brother.

At the age of 24, De Porres was given the habit of a coadjutor brother and was assigned to the infirmary where many miracles were attributed to him. Although he never left Lima, many people around the world attributed their salvation to him. By the time of his death, he was known as a saint throughout the region.

Martin de Porres was beatified in 1837 and canonized on May 6, 1962. Many buildings around the world are named in his honor, including Saint Martin de Porres High School in Detroit, Michigan. His biography, “St. Martin de Porres: Apostle of Charity,” was published in 1963.