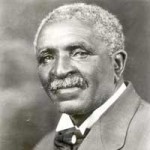 In 1896, he accepted the position to lead the Agriculture Department at Tuskegee University and remained there for 47 years. During that time, Carver devoted himself to the research and promotion of alternative crops to cotton, including peanuts and sweet potatoes. He also created approximately 100 products made from peanuts that were useful for the house. In 1923, Carver received the Spingarn Medal from the NAACP. On his grave is written, “He could have added fortune to fame, but caring for neither, he found happiness and honor in being helpful to the world.”

On July 14, 1943, President Franklin Roosevelt dedicated the George Washington Carver National Monument near Diamond, Missouri, the first national monument dedicated to an African American and also the first to a non-president. The United States Postal Service issued commemorative postage stamps in honor of Carver in 1948 and 1998. In 1977, Carver was posthumously elected to the Hall of Fame for Great Americans, in 1990 he was inducted into the National Inventors Hall of Fame, and in 2000 he was a charter inductee in the United States Department of Agriculture Hall of Heroes as the “Father of Chemurgy.”