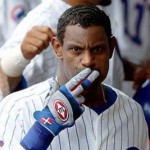 Sosa made his major league debut in 1989 and over his 18 year professional career hit 609 home runs, was a seven time All-Star selection, and in 1998 was the National League Most Valuable Player.

That same year he won the Roberto Clemente Award as the Major League Baseball player that “best exemplifies the game of baseball, sportsmanship, community involvement and the individual’s contribution to his team.” Sosa retired from professional baseball in September, 2007 and currently lives in the Dominican Republic.