By Chimsima Zuhri on November 16, 2010 in African American History, November 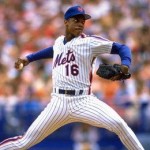 Gooden made his major league debut in April, 1984 with the New York Mets and that year was selected the National League Rookie of the Year. In 1985, he had one of the most dominating single seasons in base ball history, winning 24 games, with 268 strikeouts, and an Earned Run Average of 1.53.

Based on that performance, he became the youngest ever recipient of the Cy Young Award, given annually to the best pitcher in the league. While he would have several more effective seasons, he never re-approached that level of dominance. In 1999, Gooden released his autobiography “Heat” in which he discussed his struggles with alcohol and cocaine. He retired before the 2001 season.

In 2010, Gooden was inducted into the New York Met’s Hall of Fame.