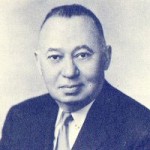 Logan was born January 7, 1897 in Washington, D. C. He earned his Bachelor of Arts degree from Williams College in 1917 and enlisted in the United States Army. In 1919 he requested, and was granted, a discharge because of his dissatisfaction with the treatment of African Americans. For the next five years, he lived and worked in Europe. Logan returned to the U. S. in the mid-1920s and earned his Master of Arts degree in history from Williams College in 1929.

He went on to earn another Master of Arts degree in 1932 and his Ph. D. in 1936 from Harvard University. Logan was best known for his study of the post-Reconstruction period of the United States. In 1932, he was appointed to President Franklin D. Roosevelt’s Black Cabinet where he drafted the executive order prohibiting the exclusion of blacks from the military in World War II. In the late 1940s, he was the chief advisor to the NAACP on international affairs.

From 1950 to 1951, he served as the director of the Association for the Study of African American Life and History. Logan was also a long-standing scholar and professor at Howard University. In 1980, Logan was awarded the NAACP Spingarn Medal. His biography, “Rayford W. Logan and the Dilemma of the African American Intellectual,” was published in 1993.