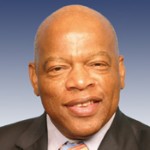 In 1960, he was a co-founder of the Student Nonviolent Coordinating Committee and from 1963 to 1966 served as the organizations chairman. He participated in the Freedom Rides to desegregate the South and was beaten bloody by a white mob in Montgomery, Alabama in the spring of 1961. At the 1963 March on Washington for Jobs and Freedom, Lewis was the youngest speaker.

In 1981, Lewis was elected to the Atlanta City Council and in 1986 he was elected to the United States House of Representatives where he serves today. Lewis was the 2002 recipient of the NAACP Spingarn Medal. In 2011, Lewis was awarded the Presidential Medal of Freedom, the nation’s highest civilian honor, by President Barack Obama. Lewis published his autobiography, “Walking with the Wind: A Memoir of the Movement,” in 1999.