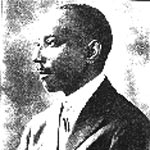 Wyatt attended local Episcopal schools because Catholic schools refused to admit him because of his race.

He earned his Bachelor of Arts and Master of Arts degrees from Howard University in 1901 and 1905, respectively. From 1902 to 1910, he taught at the Baltimore High School for Negroes and from 1914 to 1924 he was Professor of Botany at Howard. In 1921, Turner earned his Ph.D. in Botany from Cornell University, the first African American to earn a doctorate from Cornell. From 1924 to his retirement in 1945, Turner was a professor in the Botany Department at Hampton Institute. Throughout his career, the United States government consulted Turner about agricultural problems.

In 1909, Turner was a founding member of the National Association for the Advancement of Colored People and throughout the 1920s was active in the black voter registration movement. In 1925, he founded the Federated Colored Catholics to fight racism and segregation in the Catholic Church and promote racial harmony. Turner also wrote for numerous educational, scientific, and religious periodicals. In 1976, the Secretariat of Washington, D.C.’s black Catholics established the annual Thomas Wyatt Turner Award, its highest award, and in 1977 Hampton University named its science building Turner Hall. Turner died April 21, 1978.