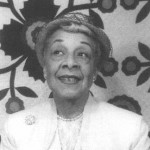 From 1917 to 1921, Holt served as music critic for the Chicago Defender newspaper and in 1919 she co-founded the National Association of Negro Musicians. By 1926, she had composed over 200 works of orchestral music and chamber songs. That same year, she moved to Europe and Asia where she spent the next 12 years singing. In 1943, Holt took a position as editor and music critic for the Amsterdam News newspaper and in 1945 became the first black member of the Music Critics Circle. From 1953 to 1964 when she retired, she hosted a radio concert series called “Nora Holt’s Concert Showcase.”