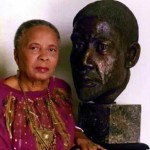 She taught in the Chicago Public School System from 1940 to 1968 and worked as a professor of humanities at Kennedy-King College from 1969 to 1979. In 1961, Burroughs founded the DuSable Museum of African-American History and served as director of the museum until 1985. That year, she was appointed a commissioner of the Chicago Park District. As a poet, Burroughs published “ What Shall I Tell My Children Who Are Black?” in 1968 and “Africa, My Africa” in 1970.