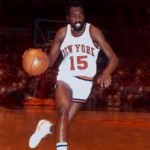 At an early age, Monroe was a playground legend known as “Thomas Edison” because of the many moves that he invented. In 1967, while playing for Winston-Salem State University, he earned NCAA College Division Player of the Year. That same year, Monroe was selected by the Baltimore Bullets in the NBA Draft and in 1968 he won the NBA Rookie of the Year Award.