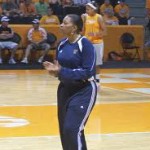 Charles also earned her bachelor’s degree in child and family studies that year. From 1991 to 1996, Charles played professional basketball overseas. From 2003 to 2006, she was an assistant coach at the University of Detroit Mercy. She is currently director of character development for the University of Tennessee’s women’s basketball team. Charles was inducted into the Women’s Basketball Hall of Fame in 2007.