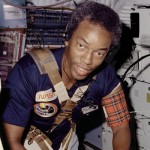 Bluford earned his pilot wings in 1966 and flew 144 combat missions, including 65 over North Vietnam. He became an astronaut with the National Aeronautics and Space Administration in 1979 and served on four space missions, logging more than 688 hours in space. Bluford left NASA in 1993 and is currently president and general manager of Aerospace Technology, an engineering consulting organization. Bluford was inducted into the International Space Hall of Fame in 1997 and the United States Astronaut Hall of Fame in 2010.