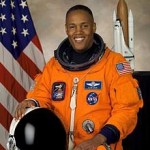 He has logged 612 hours in space. In 2009, Drew served as director of U. S. operations at Yuri Gagarin Cosmonauts Training Center in Russia.