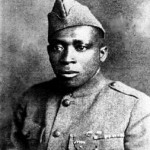 Johnson was born in 1897 in Alexandria, Virginia and moved to Albany, New York in his early teens. Johnson enlisted in the army in 1917, joining the all-black New York National Guard unit which was assigned to the French command during World War I. While on guard duty on May 14, 1918, Johnson came under attack by a German raider party.

Johnson displayed uncommon heroism when using his rifle and a knife he repelled the Germans, thereby rescuing a comrade from capture and saving the lives of his fellow soldiers. For his actions, Johnson was the first American soldier in World War I to receive the Croix de Guerre with star and Gold Palm from the French government. In 1991, a monument was erected in his honor in Albany and a street was renamed Henry Johnson Boulevard.

In 1996, he was posthumously awarded the Purple Heart and in 2003 the Distinguished Service Cross, the army’s second highest award.