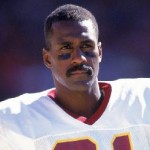 Monk played college football for Syracuse University from 1976 to 1979 and earned his bachelor’s degree from the College of Visual and Performing Arts. Monk was selected by the Washington Redskins in the 1980 NFL Draft.

Over his 15-season professional career, Monk was a three-time Pro Bowl selection and a member of the NFL 1980s All-Decade team. Monk retired after the 1995 season and was inducted into the Pro Football Hall of Fame in 2008. He is co-founder and an executive at Alliant Merchant Services, an electronic payment services company. He is also a co-founder of the Good Samaritan Foundation which provides youth with the skills, training and resources to compete successfully.