By Chimsima Zuhri on June 15, 2011 in African American History, June 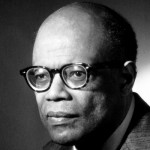 June 15, 1991 William Arthur Lewis, the first black person to win a Nobel Prize in a category other than peace, died.

Lewis was born January 23, 1915 in Saint Lucia. After receiving his Bachelor of Science degree in 1937 and Ph. D. in 1940 from the London School of Economics, he lectured at the University of Manchester until 1959 when he was appointed Vice Chancellor of the University of West Indies.

Key works by Lewis include “Economic Development with Unlimited Supplies of Labour” (1954) and “The Theory of Economic Growth” (1955). Lewis was knighted in 1963 and received the Nobel Prize for Economics in 1979. He served as a full professor in the Department of Economics at Princeton University from 1964 until his retirement in 1983. After his retirement, he became president of the American Economic Association. In 2007, the Arthur Lewis Building was opened at the University of Manchester.