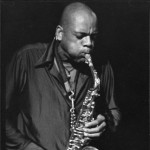 Hemphill was born January 24, 1938 in Fort Worth, Texas. He joined the United States Army in 1964 and served for several years. In 1968, Hemphill moved to St. Louis, Missouri and co-founded the Black Artists’ Group, a multi-disciplinary arts collective. He moved to New York in the mid-1970s and in 1976 founded the World Saxophone Quartet.

Hemphill left the group in the early 1990s. He recorded over 20 albums as a leader, including “Dogon A. D.” (1972), “Buster Bee” (1978), and “Five Chord Stud” (1993). Ill health forced Hemphill to stop playing the saxophone but he continued writing music until his death. He was posthumously inducted into the Down Beat Jazz Hall of Fame in 1995. A multi-hour oral history interview that he conducted for the Smithsonian Institute in 1994 in held at the Archives Center of the National Museum of American History.