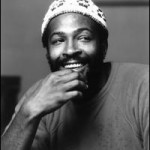 Gaye started as a member of The Moonglows in 1958 and after they disbanded in 1960, he moved to Detroit, Michigan and signed with Motown Records. Gaye experienced his first significant success in 1962 as co-writer of the Marvelettes’ “Beechwood 4-5789.” This was soon followed by his first hit single, “Stubborn Kind of Fellow.”

On April 1, 1984 Gaye was fatally shot by his father. His autobiography, “Divided Soul,” was published in 1986 and in 1987 he was posthumously inducted into the Rock and Roll Hall of Fame.