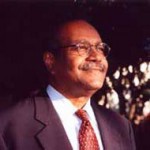 Riles was born June 27, 1917 near Alexandria, Louisiana. He graduated from Northern Arizona State University in 1940 and served in the United States Army Air Force during World War II. In 1971, Riles was elected California Superintendent of Public Instruction, the first African American elected to statewide office in California and the first African American in the nation to be elected State Superintendent of Schools.

In 1973, he was awarded the NAACP Spingarn Medal for outstanding achievement by an African American. Wilson C. Riles Middle School in Roseville, California is named in his honor.