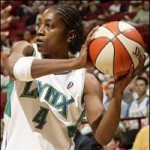 Edwards played high school basketball and in 1982 was the Georgia High School Player of the Year. She played college basketball at the University of Georgia where she was a two-time All-American. After earning her degree in 1990, she played for nine seasons in Italy, Japan, Spain, and France.

Edwards also became the first female basketball player to play in five Olympic Games, winning Gold medals at the 1984 Los Angeles Games, the 1988 Seoul Games, 1996 Atlanta Games, 2000 Sydney Games, and a Bronze medal at the 1992 Barcelona Games. She holds the distinction of being the youngest and oldest woman Gold medal winner in women’s basketball.