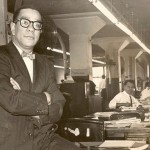 Wright served in the Marine Corps in the Pacific theater during World War II, where he attained the rank of staff sergeant. After the war, he earned his undergraduate degree from Howard University and then graduated with honors from the Ohio State University Columbus School of Journalism in 1950.

Wright integrated the newsroom of the now defunct New York World Telegram and Sun where he wrote a 10-part undercover investigative series about the conditions of migrant farms that was a finalist for the Pulitzer Prize. He later turned those articles into a book, “They Harvest Despair: The Migrant Farm Worker,” which was published in 1965. He also served as an editor of Jet and Ebony magazines. Wright’s awards include the Heywood Broun Memorial for most distinguished reporting in the United States and Canada, the Paul Tobenkin Memorial for best news writing in the U. S. on racial intolerance and bigotry, and the Gentry Award for Outstanding Achievement.