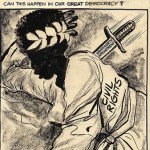 He was a civil rights leader noted for his ability to unify black newspeople in the fight against discrimination of African Americans in the press. Prattis died February 29, 1980.

House of Representatives, World War I