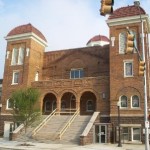 September 15, 1963 The 16th Street Baptist Church in Birmingham, Alabama was bombed by members of the United Klan of America.

Addie Mae Collins (14), Denise McNair (11), Carole Robertson (14) and Cynthia Wesley (14) were killed in the blast, and 22 other people were injured. Outrage at the bombing resulted in violence across Birmingham which resulted in the death of two more African American youths, Johnny Robinson (16) and Virgil Wade (13).

Robert Edward Chambliss was convicted in 1978 of the four murders and sentenced to several terms of life imprisonment. He died in prison in 1985. Bobby Frank Cherry and Thomas Edwin Blanton, Jr. were convicted in 2002 and sentenced to life in prison. Cherry died in prison in 2004 and Blanton remains incarcerated. Herman Frank Cash, a primary suspect, died in 1994 without being charged. Another suspect, Troy Ingram failed two polygraph examinations but was never charged. He died in 1973.

Many poems, songs, and books have been written in memory of the bombing, including the song “Mississippi Goddam” by Nina Simone and the poems “The Ballad of Birmingham” by Dudley Randall and “Birmingham Sunday” by Langston Hughes. A 1997 documentary about the bombing “4 Little Girls”, directed by Spike Lee was nominated for an Academy Award for Best Documentary.