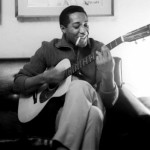 Cooke began his career singing gospel. In 1950, he became the lead singer for The Soul Stirrers who recorded several hits, including “Peace in the Valley” (1951) and “One More River” (1955). In 1957, Cooke left The Soul Stirrers and recorded “You Send Me” which spent three weeks at number one on the Billboard pop chart.

In 1960, he released “Chain Gang” which reached number two on the pop chart. In all, Cooke released 29 top 40 hits, including “Bring it on Home to Me” (1961) and “Another Saturday Night” (1963). Cooke was also one of the first black performers to attend to the business side of his career. In 1961, he started his own record label and later created a publishing imprint and management firm. On December 11, 1964, Cooke was shot dead. After his death, several other of his recordings were released, including “A Change is Gonna Come” (1964) which is generally considered his greatest composition.

In 1986, Cooke was an inaugural inductee into the Rock and Roll Hall of Fame and in 1999 he was posthumously honored with a Grammy Lifetime Achievement Award. Several biographies have been published about Cooke, including “You Send Me: The Life and Times of Sam Cooke” (1995) and “Dream Boogie: The Triumph of Sam Cooke” (2005).