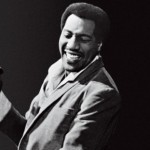 Redding was born September 9, 1941 in Dawson, Georgia. He grew up in Macon, Georgia where he sang in the church choir and won the local talent show 15 weeks in a row. In 1960, Redding began touring the south and in 1962 recorded “These Arms of Mine” which he had written.

Between 1964 and 1966, Redding recorded a number of hits including “Respect” (1965), “Satisfaction” (1965), and “Try a Little Tenderness” (1966). His biggest hit, “Sitting on the Dock of the Bay,” was recorded three days before his death and released in January, 1968. That recording won 1968 Grammy Awards for Best R&B Song (songwriting) and Best Male R&B Vocal Performance. It also was the first posthumous number one single in U. S. chart history.

Between 1968 and 1970, three additional albums of material recorded prior to his death were released. In 1993, the United States Postal Service issued a commemorative postage stamp in his honor. In 1989, Redding was posthumously inducted into the Rock and Roll Hall of Fame, in 1994 he was inducted into the Songwriters Hall of Fame, and in 1999 he was posthumously awarded a Grammy Lifetime Achievement Award. The Rock and Roll Hall of Fame lists three of Redding’s recordings, “Shake” (1965), “Try a Little Tenderness,” and “Sitting on the Dock of the Bay,” amongst The 500 Songs that Shaped Rock and Roll.