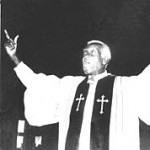 Dorsey was born July 1, 1899 in Villa Rica, Georgia. He learned to play blues piano as a young man. In the 1920s, Dorsey was known for playing the blues and is credited with composing more than 400 blues and jazz songs, including the 1928 hit “Tight Like That” which sold seven million copies.

Dorsey began recording gospel music in the mid-1920s and became the music leader of two churches in the early 1930s. In 1932, he wrote his most famous song, “Take My Hand, Precious Lord” and in 1937 he wrote “Peace in the Valley.” Dorsey was the first African American elected to the Nashville Songwriters Hall of Fame in 1979 and also the first inducted into the Gospel Music Association’s Living Hall of Fame in 1982. In 2007, he was a charter inductee into the Gennett Record Walk of Fame. “The Rise of Gospel Blues: The Music of Thomas Andrew Dorsey in the Urban Church” was published in 1992.