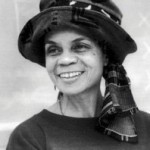 In 1943, Sanchez moved to Harlem, New York to live with her father. In 1955, she earned a Bachelor of Art degree in Political Science from Hunter College. Later she completed postgraduate work at New York University.

Sanchez has taught at eight universities and has lectured at over 500 college campuses. She was the first Presidential Fellow at Temple University where she began working in 1977, where she held the Laura Carnell chair until her retirement in 1999.

She is currently a poet-in-residence at Temple. In 1969, she was awarded the P. E. N. Writing Award. She also won the National Academy and Arts Award and the National Endowment for the Arts Fellowship Award in 1978-1979.