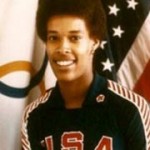 Hyman was born July 31, 1954 in Inglewood, California. By the time she was 17, she had reached 6 feet 5 inches in height. Hyman attended the University of Houston as that school’s first female scholarship athlete and was a three-time All-American selection.

In 1984, Hyman was a member of the United States volleyball team that won the Silver medal at the Los Angeles Olympic Games. Hyman was the most famous volleyball player of her time, with a spike that traveled up to 110 miles per hour. Hyman died while playing in Japan from an aortic dissection resulting from previously undiagnosed Marfan syndrome. In 1987, the Women’s Sports Foundation established the annual Flo Hyman Award which is given “to a female athlete who captures Hyman’s dignity, spirit and commitment to excellence” and in 1988 she was posthumously inducted into the Volleyball Hall of Fame.