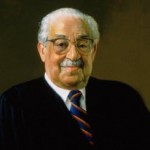 January 24, 1993 Thurgood Marshall, the first African American to serve on the Supreme Court of the United States, died.

He won his first major civil rights case, Murray v. Pearson, in 1936 and his first case before the Supreme Court, Chambers v. Florida, in 1940. In total, he won 29 of 32 cases he argued before that court. His most famous case was the 1954 Brown v. Board of Education of Topeka in which the court ruled that “separate but equal” public education could never be truly equal. Marshall was the 1946 recipient of the NAACP Spingarn Medal. In 1963, President John F. Kennedy appointed Marshall to the United States Court of Appeals for the Second Circuit and in 1967 President Lyndon B. Johnson appointed him to the Supreme Court.

Marshall served on the Supreme Court for 24 years, retiring in 1991. There are numerous memorials to Marshall around the country, including the main office building of the federal court system which is named in his honor and has a statue of him in the atrium. In 1976, Texas Southern University named their law school after him and in 1980 the University of Maryland School of Law opened the Thurgood Marshall Law Library. In 1993, he was posthumously awarded the Presidential Medal of Freedom, the nation’s highest civilian honor, by President William Clinton. Biographies of Marshall include “Thurgood Marshall: American Revolutionary” (1998) and “Thurgood Marshall” (2002).