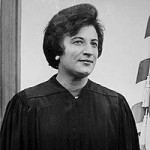 Motley was born September 14, 1921 in New Haven, Connecticut. She earned her Bachelor of Arts degree from New York University in 1943 and her law degree from Columbia Law School in 1946. She began her career as a law clerk at the NAACP Legal Defense Fund, eventually becoming associate counsel and the LDF’s first female attorney. In 1950, she wrote the original complaint in the case of Brown v. Board of Education.

In 1993, Motley was inducted into the National Women’s Hall of Fame. In 2001, President William Clinton awarded her the Presidential Citizens Medal, the second highest civilian award in the United States, and in 2003 the NAACP awarded her the Spingarn Medal.