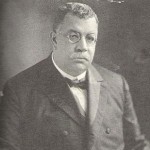 Carey was born August 25, 1868 in Atlanta, Georgia. He earned his Bachelor of Arts degree from Atlanta University in 1888 and became a licensed preacher.

In 1898, Carey moved to Chicago, Illinois to pastor Quinn Chapel AME, the oldest black church in the city. He built a strong reputation as a powerful and talented preacher and maintained political connections with the Republican Party. In 1915, he was appointed to head Illinois’ celebration of the 50th anniversary of emancipation. Carey also served as chaplain of the all-black Illinois 8th Regiment during World War I. Carey later served as the Chief Examiner of Claims for the City of Chicago and on the Chicago Civil Service Commission where he used his influence to promote the hiring of African American police officers.