Tags: jockey, National Museum of Racing and Hall of Fame 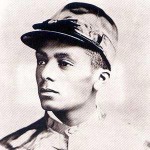 Over his career, Murphy won 628 of his 1,412 starts, a winning percentage of 44.5% that historians feel “there is no chance that his record of winning will ever be surpassed.” At his peak in the late 1880s, he was the highest paid athlete in America, earning close to $20,000 a year. Murphy was the first jockey inducted into the National Museum of Racing and Hall of Fame in 1955 and the official Kentucky Derby website states, “Isaac Murphy is considered one of the greatest race riders in American History.”

Since 1995, the National Turf Writers Association has given the Isaac Murphy Award to the jockey with the highest winning percentage for the year. A book of poetry, “Isaac Murphy: I Dedicate This Ride,” was published in 2010 in memory of Murphy.

jockey, National Museum of Racing and Hall of Fame