By Chimsima Zuhri on July 18, 2011 in African American History, July 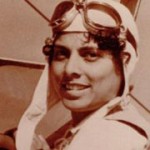 Chappell was born January 22, 1906 in Glasgow, Kentucky. She earned a Bachelor of Arts degree from Indiana Teachers College in 1927. Chappell started to take flying lessons in 1934 and earned her pilot’s license in 1937, making her the first African American woman licensed to fly in the United States. Also that year, she earned a Master of Business Administration degree from Northwestern University and co-founded the National Airmen’s Association of America with a mission to get African Americans into the United States Air Force.

In 1939, she earned her commercial pilot’s license and the next year she co-founded the Coffey School of Aeronautics where approximately 200 pilots were trained over the next seven years. Many of these pilots later became Tuskegee Airmen. In 1941, Chappell became the first African American officer in the Civil Air Patrol and in 1942 she became a training coordinator for the Civil Aeronautics Administration. In 1943, Chappell earned her mechanic’s license, making her the first woman in the U. S. to have both a mechanic’s and a commercial pilot’s license.

In 1972, she was appointed to the Federal Aviation Administration Women’s Advisory Board in recognition of her contributions to aviation as a pilot, instructor, and activist. Chappell was posthumously inducted into the Aviation Hall of Fame in 2003.