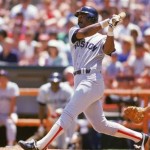 Rice debuted with the Boston Red Sox in 1974 and over his sixteen seasons with the team was an eight-time All-Star selection, the American League Most Valuable Player in 1978, and one of two players in history to lead the league in total bases three years in a row.

Rice retired in 1989 and was inducted into the Baseball Hall of Fame in 2009. His uniform number 14 was retired by the Red Sox in 2009. Rice has been associated with a number of charitable organizations and in 1992 was awarded the Dana-Farber Cancer Institute’s “Jimmy Award” which honors individuals who have demonstrated their dedication to cancer research.

His involvement with Major League Baseball’s “Reviving Baseball in Inner Cities” program resulted in the naming of a youth baseball facility in Roxbury in his honor in 1999. A youth recreation center in his hometown of Anderson is also named in his honor. Rice is an instructional batting coach with the Red Sox organization.