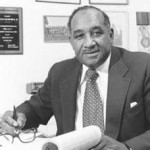 Mitchell graduated from Lincoln University in 1931 and later earned a law degree from the University of Maryland. In 1945, he became the first labor secretary of the NAACP and in 1950 became head of the NAACP Washington office.

In that capacity, he was nicknamed “the 101st United States Senator” for his tireless campaigns to secure the passage of the 1957 Civil Rights Act, the 1960 Civil Rights Act, the 1964 Civil Rights Act, the 1965 Voting Rights Act, and the 1968 Fair Housing Act. These efforts earned him the NAACP Spingarn Medal in 1969. In 1980, Mitchell was presented the Presidential Medal of Freedom, the nation’s highest civilian honor, by President Jimmy Carter. Mitchell died March 19, 1984 and the main courthouse in Baltimore is named the Clarence M. Mitchell, Jr. Courthouse. Also, the engineering building at Morgan State University and the main admission building at the University of Maryland are named in his honor. A biography, “Lion in the Lobby: Clarence Mitchell, Jr.’s Struggle for the Passage of Civil Rights Laws,” was published in 1990.