July 24, 1807, is the date of birth of Ira Aldridge, the most prominent African American dramatic actor of the 19th century. 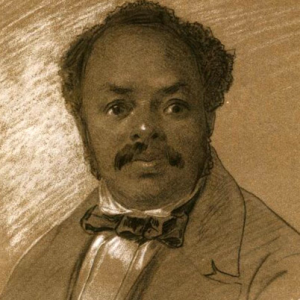 Aldridge performed roles in plays written by Shakespeare in the United States and across Europe at a time when most African Americans remained enslaved. Born and raised in New York City, not the South, he benefited from this more tolerant environment. Though New York was not free of racism, which is why Aldridge eventually moved to Europe, the city accorded him opportunities unavailable to his Southern brethren. Being able to attend school was one such benefit of life in the North. Aldridge learned of the theater in school and decided early in life to pursue an acting career. He would become a celebrated black actor in Europe, at times being the highest paid actor in the entire world. The life and career of Ira Aldridge demonstrated that Africans Americans could perform serious dramatic roles on a par with, and at times surpassing, those of other races.

Ira Aldridge began his journey to the international theatrical circuit as a youth in New York. His father was a minister, who sent Ira to the Free African School, an institution set up by a group of anti-slavery advocates. The classical education Aldridge received at the Free African School was his first introduction to the arts. After spending leisure time viewing plays at the prestigious Park Theater, Aldridge’s decision to enter the field was complete. In the early 1820’s, he would excel, as a member of the all-black African Grove, in the roles of Hamlet and Romeo, both characters in plays by Shakespeare. Ira Aldridge was not satisfied with being only a good black actor; he wanted the opportunity to prove his worth against the best in the world. Since America, still a slave-owning society, refused to allow African Americans to perform freely, Aldridge decided to attempt a career in the more liberal European arts scene.

In England, Ira Aldridge worked first as a dressing room attendant for established actors. When he got the chance to perform, Aldridge received favorable reviews. By 1825, he would star in major roles in London theaters. London was not free of racism, as Aldridge soon became aware. Newspaper columnists and theater reviewers would at times question the decisions to pair Aldridge with white female co-stars. Some theaters in London refused to allow Aldridge to perform. Nonetheless, he remained popular in the theater circuit, especially in the small towns.

In 1852, Aldridge began a performing tour of Europe that would have been exceptional for anyone, especially a black actor in the 19th century. He performed in cities throughout the continent including Berlin, Budapest, Brussels, Cologne, Dresden, Hamburg, Moscow, Munich, Prague, St. Petersburg and Vienna. It was in Russia that he would become the world’s highest paid actor per appearance. Aware of the undoubtedly favorable result of the Civil War in 1865, Aldridge began planning to return to America. He would never make it back to his nation of birth, dying on August 7, 1867 in Lodz, Poland. Aldridge remains the only black actor honored by the Shakespeare Memorial Theater in London.