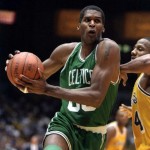 Parish played college basketball at Centenary College of Louisiana and earned his B. A. degree in 1976. Parish was selected by the Golden State Warriors in the 1976 NBA Draft and traded to the Boston Celtics in 1980.

Over his 20 season professional career, Parish was a 9-time All-Star and 4-time NBA champion. Parish retired after the 1997 season and in 1998 the Boston Celtics retired his 00 jersey number. In 1996, Parish was named one of the 50 Greatest Players in NBA History and in 2003 he was inducted into the Naismith Basketball Hall of Fame.