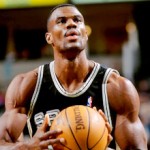 Robinson played college basketball for the United States Naval Academy where he was an All-American in 1986 and 1987 and won the Naismith and Wooden Awards as the College Basketball Player of the Year in 1987. Robinson is generally considered to be the best basketball player in U. S. Naval Academy history.

After graduating from the academy, Robinson was selected by the San Antonio Spurs in the 1987 NBA Draft. However, Robinson had to serve two years of duty with the navy before he could join the team. Over his 14 season professional career, Robinson was the 1990 Rookie of the Year, the 1992 Defensive Player of the Year, the 1995 Most Valuable Player, a 10-time All-Star, and 2-time NBA Champion. Robinson played on three men’s basketball Olympic teams, winning a Bronze medal at the 1988 Seoul Olympic Games and Gold medals at the 1992 Barcelona Games and the 1996 Atlanta Games.

In 2001, Robinson received the NBA Sportsmanship Award which is given annually to the player who most “exemplifies the ideals of sportsmanship on the court – ethical behavior, fair play and integrity.” Also in 2001, Robinson and his wife founded the Carver Academy in San Antonio. To date they have donated more than $11 million to the school. Robinson retired in 2003 and that same year the NBA renamed its award for outstanding charitable efforts in honor of Robinson. Winners of the NBA’s Community Assist Award receive the David Robinson Plaque with the inscription “Following the standard set by NBA Legend David Robinson who improved the community piece by piece.”

Robinson was inducted into the U. S. Olympic Hall of Fame in 2008 and the Naismith Basketball Hall of Fame in 2009. In 2008, Robinson co-founded Admiral Capital Group to invest in opportunities that can provide both financial and social returns. His biography, “David Robinson: Backboard Admiral,” was published in 1991.