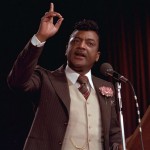 Rev. Ike’s ministry reached its peak in the mid-1970s when his weekly radio sermons were carried by hundreds of stations across the United States. His slogan was “You can’t lose with the stuff I use.”